The good, the bad, the Jerusalem Marathon!


I have, for now, given up running full marathons. I did not particularly enjoy my most recent marathon or the training leading up to it. Without enjoying it, the time commitment is just too great to continue running them. But it is really much more than the time commitment that made me "quit".

Running a marathon is a great challenge. it takes a lot of training to build up the stamina and endurance. And it is highly addictive. At a certain point I stopped seeing it as a challenge. After all, I have already run 6 marathons - I know I can do it. There is no longer a challenge in it. And I don't want to be addicted to it. As soon as I finished my last marathon, in January, I was already looking toward the next marathon I could register for - and that was immediately after I decided I didn't want to run any more. I don't want to be addicted - I want to run because I enjoy it, not because I am addicted to it.

For now I have decided I will run half-marathons. 21.1km is a good distance. It is a challenge, it is difficult and it is not what I consider to be overkill (aka abusive) for the body.

I participated in the Jerusalem Marathon this past Friday by running in the half-marathon event. The Jerusalem Marathon is a wonderful event - it is a city marathon, with local residents lining the streets and cheering. Music is playing around the city. It is a beloved city to me, it is the holy city. And running around it in beautiful weather with about 20,000 other people is just a wonderful experience.

The weather was beautiful, the city was beautiful the people were beautiful. I saw the city, I saw friends, I saw fellow runners, and I saw lots of people, both runners and pedestrians, out celebrating life.

The one disappointing part was in a section I had never before seen - the beautiful Derekh HaRakevet - the Railroad Road - in the Railroad neighborhood, a.k.a Bakaa. We ran through a park that used to be old railroad tracks. This was a beautiful section, and the old tracks have been redone as a walkway designed to look like railroad tracks. 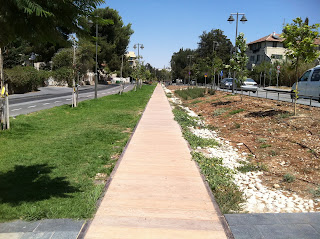 The downer in this section was that a bunch of local residents were out protesting the marathon. They were chanting and held up signs that said things like "you celebrate and we pay the price", signed by the restricted residents of the Railroad neighborhood. They were upset that large sections of the city, including their neighborhood, had been shut down for much of the day. Understandable, but very short-sighted. The marathon brought 20,000 people to various parts of the city. Those people spent lots of money in Jerusalem  be it in hotels, shopping, and other tourism dollars.

A couple days before the marathon I heard Mayor of Jerusalem Nir Barkat on the radio talking about it. One of the things he said that I found very interesting was that every running should run with a fellow runner from Jerusalem. Barkat explained that the city has so much history that each runner should run with someone who knows the city and can explain it to them as they run through it.

That is a phenomenal idea. I knew the history of some parts, but not of other parts. I think it would be a lovely thing for the next Jerusalem Marathon. Perhaps a project can be included in the marathon registration in which runners would be partnered-  those who want to "guide" and those who want to be "guided". It might be an overwhelming task, but I think it is a wonderful idea. As I was running, I was passed by a group, I think it was a group of army runners, who were doing just that - the leader of the group was explaining the different areas as they passed through them.


What a  wonderful experience. I hope to do it again next year!
Posted by Rafi G. at 3:20 PM 5 comments: