My Journey To The 2011 NYC Marathon

After this, can anyone have an excuse for not running (or doing whatever your preferred form of exercise is)?

From the Chicago Suntimes:

Amber Miller slowed her usual pace for Sunday’s Chicago Marathon, taking 6 hours and 25 minutes to complete the grueling 26.2 mile race, but she had a great reason for finishing three hours off her personal best time.


Miller was almost 39 weeks pregnant when she hit the starting line and finished despite running through contractions — then delivered a daughter Sunday night about 7 1/2 hours after completing the race.


Still, she said, the marathon was the easiest part of her day.


“The race was definitely easier than labor,” Miller said Monday as she cradled her new daughter, June Audra.


Miller, 27, a veteran marathon runner, decided to take part after getting the OK from her doctor — and because she and her husband had already signed up for the race.


She’s also been running regularly through her pregnancy without any problems.


“I know what I can handle. This is something I’ve been doing for a long time,” said Miller, who has completed eight marathons.


In fact, Sunday’s race wasn’t even her daughter’s first marathon — Miller was 17 weeks pregnant when she ran in the Wisconsin Marathon earlier this year.


The Westchester resident competed in another marathon when she was about 17 weeks pregnant with her son, Caleb, now 19 months old.


She set an easy pace, running two miles, then walking the next two, Miller said. Her husband, Joe, ran with her to keep a close eye on her.


She said some other racers did double takes when they noticed the visibly pregnant runner in the white T-shirt jogging along.


And some medical workers and race volunteers seemed startled to see her on the course.


“They kept looking at me,” she said.


“I don’t know if I actually was in labor during the race,” said Miller.


She figures her labor really started about 3 p.m. just after she finished the race, but she still felt well enough to grab a late lunch before heading to the hospital.


“I thought I should probably get some food first,” she said.


She and her husband drove to Central DuPage Hospital in Winfield, where their 7-pound, 13-ounce daughter was born later that night.


The little girl, who slept through a Monday press conference, is in “excellent” shape, said Dr. Jeffrey Loughead, a neo-natalogist at the hospital.


The biggest risk Miller faced in running was dehydration, which could have sent her into labor, said Loughead, a doctor for 21 years.


But he said it was clear she was in good physical shape when she ran — and her pregnancy was already full term, though Loughead said he can’t recall any other patient running a marathon before giving birth.


Miller, for her part, said she felt good and was looking forward to going home on Tuesday.


“I don’t feel tired,” she said, smiling as she held her daughter.


But the race and delivery really took a toll on her 32-year-old husband. He said he didn’t train as hard for the marathon because he really thought his wife wouldn’t run because he expected their daughter to be born first.


“I was completely exhausted. I was placing my bet on June being here already,” said Joe Miller.

Hats off to you, Amber Miller.

To paraphrase a talmudic expression, Hillel obligated the poor people, Joseph the handsome people, and Amber Miller all the pregnant women (l'havdil)
Posted by Rafi G. at 1:18 AM No comments:

Email ThisBlogThis!Share to TwitterShare to FacebookShare to Pinterest
Labels: inspiration

Run Through The Roglit Vineyards

I have not written here in a while, but I have been running. Today was a great early morning run. I ran 21+km through the Roglit Vineyards.

The group was running 30km, and I would have liked to run about 24-26km. Due to my schedule I was overly tired and that was just too much, so I cut it short at 21. I planned to meet my running partner at the entrance to Aviezer - he was driving and I was running there, as he wasn't looking to run more than 18km. 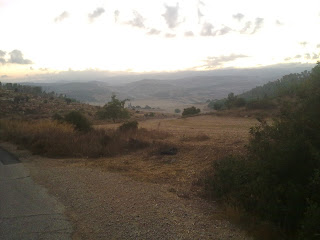 So, I get up at 4 AM to get ready and headed out at about 4:30. We met at Aviezer at just after 5. We ran up to Roglit and then found the gate to the path through the vineyards locked. We climbed over the fence and ran. The air was cool and the early morning was beautiful.

The path through the fields and vineyards starts with a long climb up to the back of Aderet. It is a tough climb, but the view behind us was stunning, which we saw when we got to the top. This picture is not even close to giving due credit to the amazing view.

As we crossed over the peak and ran down through the vineyards, the air turned much cooler. The vineyards were a strong green and the terrain was beautiful We turned around at about 8km through, and ran back. The run back was tougher, as it was a longer, albeit not as steep, uphill run. At some point we crossed through a flock of goats. This was very timely and made us consider the "sa'ir la'azazel" we are going to read about in the coming days on Yom Kippur. We would have taken a couple, but the shepherds would not have liked that idea, so on we ran.

On the way back out, the gate was still locked. Those moshavniks must have been sleeping late, as it was already 6:45 am. We climbed back over and ran down to the car.

Great run through the Roglit Vineyards.
Posted by Rafi G. at 11:25 AM No comments: